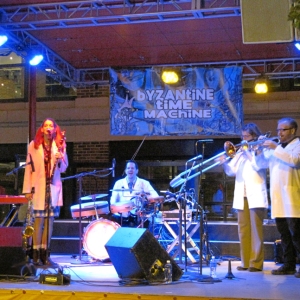 Byzantine Time Machine is an electronic/ dub music group that uses the technology of a several small computers to enhance and modify their  “Byzantine” instruments.  Leaning towards downtempo futuristic dub pop as their current genre, they are veterans of Chicago’s world music scene,  and they have brought with them a Greek dulcimer, a hybrid Middle Eastern drum kit, and a variety of Balkan brass and Turkish clarinet styles.

In the tradition of dub, where the music studio is considered to be another instrument which can be played in real time by an engineer,

In dub, the studio is an instrument

BTM uses their “time machine” to apply dub style effect processing to their live set in real time.   The drums, instruments and vocals are sent to a wide variety of effects such as echo and reverberation, which are no longer used as transparent and unchanging background ambiance, but are “played” by the engineer, turning them on and off, applying excessive amounts of them to different instruments, and making them stand out as unique sounds on their own.

Applying dub effects to our instruments in real time.

Also in the tradition of dub, BTM keeps the bass deep and low, and also adds a horn section with their own dedicated effects processor! 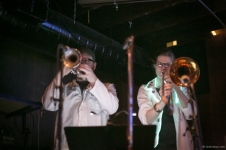 Eve’s clarinet has an electronic pickup which allows for signal processing such as ring-modulation, distortion, vibrato, pitch shift, and side-chain gating to an inaudible pre-programmed midi note sequence. 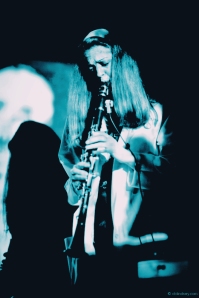 An electronic pickup in the barrel of Eve’s clarinet allows for unique signal processing opportunities.