Here is an experiment where a different sounds made on a Persian Tombak are used to open gates on several different electronic synth tracks in Ableton.

This is an extension of the producer trick used to fatten a kick drum by using the kick signal to open a gate on a track that contains a continuous low sine wave, so that whenever the kick plays, a low sine plays at the same time.

I took this concept a few steps further by using four different sounds on the tombak to trigger four different synth tracks.  Instead of the synth tracks having static, unchanging sounds on them, I programed melodies, octave shifts and chord changes on all the tracks except the low tone, which did have a continuous sine wave in the root key.   The tombak sounds were: low, edge, muted snap, and scratch.

In Ableton, here is the process I used:      END_OF_DOCUMENT_TOKEN_TO_BE_REPLACED

Our experimental jam “Adventure in Istanbul” has been released by Nepal based net-label Outtalectuals!  Check us out on their soundcloud page along with lots of other great music.  This partnership has spawned some new collaborations between Byzantine Time Machine and Outtalectuals artists.

Eve plays a Greek Sandouri (Hammered dulcimer) in Byzantine Time Machine.  Ableton users can now use the sounds of this instrument in their own compositions by downloading the Ableton Live Pack in the link below. 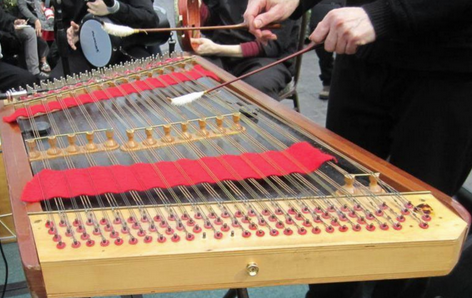 We sampled each note with 2 different hammers, felt and wood, and let you crossfade between them with the Soft/Hard knob.  There are some other controls in the macros which are self explanatory.  You can get some pretty messed up sounds with the FM knob. Enjoy!!!

Yes we are audio geeks, but really, in Turkey and Greece, the Klarino is more rockstar than the electric guitar, so why not put distortion and pitch-shift on it?

Using Ableton and Max for live, we love transforming the sweet clarinet signal to a more ‘rock’ sounding instrument.

This effects rack is connected to a knob on my MIDI controller which, when turned, it mixes in the M4L transposer with the dry signal.   EQ before the transposer eliminates the WAY TOO LOW frequencies.  I can also use this on Eve’s dulcimer since both the clarinet and the dulcimer have electronic pickups.

Here’s a short clip of Kangeli, with a bit of distorted and then pitch-shifted clarinet!!!

Sometimes we like to un-tether our selves from all the cables and connectors which are our umbilical cord to the Time Machine.   With this freedom, we can take our instruments out in the middle of the dance floor the way we did it before sound systems were invented!

Sala Sala is an old song from either Greece or Turkey depending on who you ask or which language you prefer.  I prefer the Greek version simply because I’m much more comfortable with the Greek language.   A sala is a salon or really nice living room that’s reserved for visiting. Like most folk songs I’ve encountered, Sala, Sala refers quite a bit to love and nature.

Sala sala,  in the living room we talked it out
You will marry me (lit. “take me”), I will marry you, we agreed to it

Sometimes black, sometimes white, sometimes red
Should you ask for my heart, I would give it to you

Musicians love this song because of the mode or scale it’s written in.  It’s called Saba and it means morning or bright in Arabic and is also a popular baby name.  The scale is a normal minor scale but the 4th note is flatted making it sound very exotic to Western ears.

Here’s a short video of Eve playing the Saba scale on her sandouri, followed by a short improv:

A big part of Byzantine Time Machine’s show and “look” is the art work of Richard Talaber. He was the uncle of George Lawler our drummer and “time machine” engineer.  Talaber lived from 1933 to 2002.  He graduated from the School of Art Institute, Chicago in 1959.

Above, is the earliest piece we have by Rich Talaber.  It’s a sketch of his Hungarian immigrant father done in 1957 and it earned him admission to the School of the Art Institute.  Next to it one of the photoshopped versions we use in our slideshow. 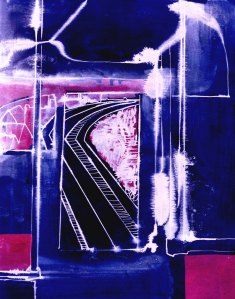 As a student at the Art Institute, one of his assignments was to paint a sports scene in the style of a famous artist. His rendition of hockey players in the style of El Greco won a feature in Sports Illustrated magazine in 1957. On a side note, isn’t it interesting how much sports illustrated has changed! 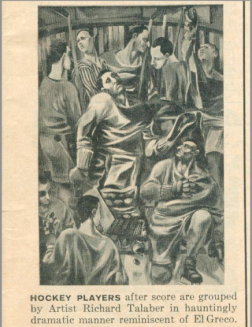 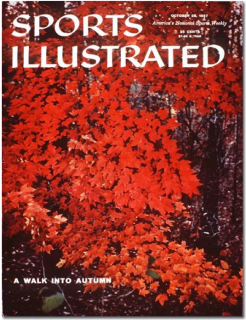 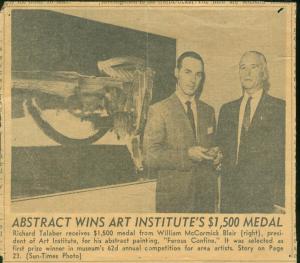 In 1959, he won the Logan Medal of the Arts. His winning painting, Ferrous Confine, was featured in Time magazine, Sept. 1959. 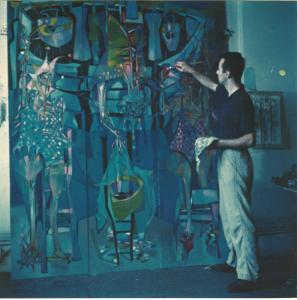 The same year he was commissioned by R. Korach of Chicago, for the above painting called Viatecum. We use a photoshopped version of this painting for our header and logo.

In the early 1960s he moved to Rome then later Paris and experimented more with abstract art.  Here’s a work of his featured in an Italian sales catalog from 1960. 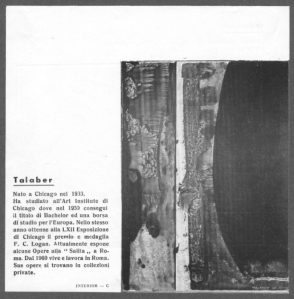 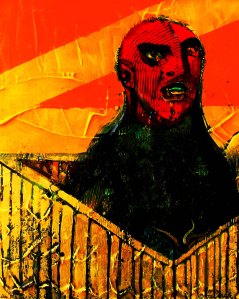 Richard Talaber returned home in the 1970s and went through a dark period of alcohol abuse that lasted through the 1980s. But, it didn’t seem to affect his talent or prodigious output, and as styles changed, so did he. Above is one of his many paintings using tape for texture underneath oil paint.  Next to it is our photoshopped version. 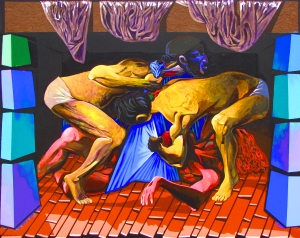 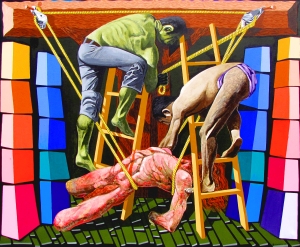 Among his most ambitious works is this Pieta, a three part work featuring Jesus being taken down from the cross.  All three paintings are six by nine feet and were completed in 1974. The man with green skin is a self portrait of Talaber himself. 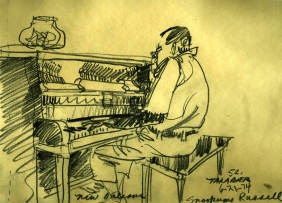 Here’s a sketch of a pianist named Snookums Russell from New Orleans in 1974 and the resulting oil painting finished in 1977.  It’s titled, Pianist and is four by five feet. It’s also incredibly beautiful, in my opinion.

Talaber preferred pencils to cameras when it came to traveling or sightseeing. Above is a guitarist from a band called “Barcelona Red” that performed at the annual Hyde Park Art Festival in 1975.

This is an enormous painting, completed in 1980 called Life Raft.  Look how amazing it looks after a few twists and turns in Photoshop. 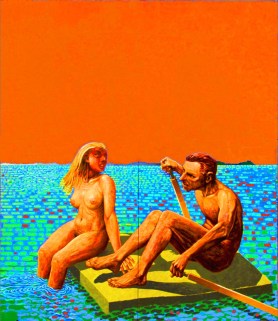 Here’s a page from one of his sketch books from the 1980s. It’s part watercolor, part marker. It looks amazing after a little photoshopping. 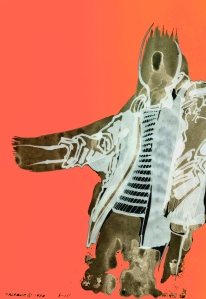 Here’s one of my favorite painting from 1980, called Hurdling Figure, it’s approximately 48″ x 48″ 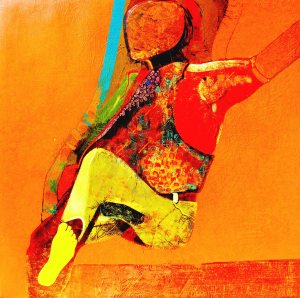 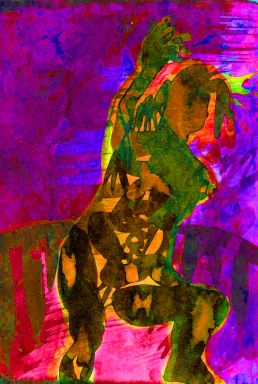 In the late 1990s, he liked to sketch photographs from the Chicago news papers. Here’s a few examples with the original on the left, the photo shopped version on the right. 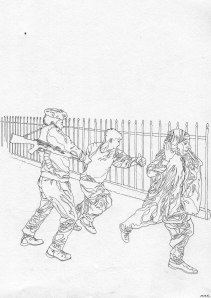 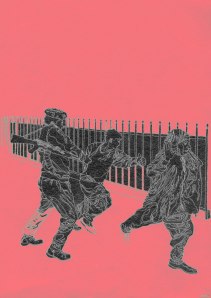 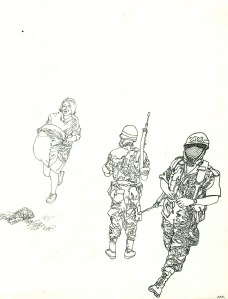 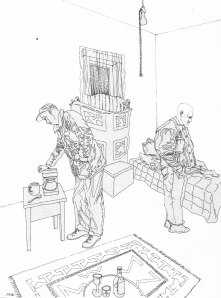 When Richard Talaber died in 2002, his family inherited all of his unsold works and sketch books as well as boxes of homework from his Art Institute days.  In 2012, George and Eve (me), his nephew and wife, photographed and scanned the entire collection adding up to over 2,000 works of art.

So, being the resourceful people that we are, we’ve incorporated the art into our performances and promotional posters.  They’re just too beautiful to sit in storage and thankfully with the help of computers, they don’t have to. 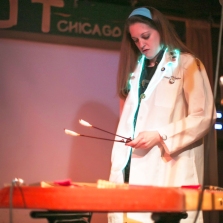 People often ask me to explain my instrument.  What’s it called? Where’s it from? How old is it? How did I get it? How did I learn to play it?  well, there’s a lot of answers to those questions.

It’s  mostly used for American and English folk music and it’s especially popular in the music of the Appalachian mountains.  The bridges (the long pieces of wood going down the front of the instrument) hold the strings up. Where they are placed divides the horizontal string placement and determines the note pitches.  This is predominately the main difference between all these types of instruments.

Above is a Greek sandouri, you can see several differences in the bridge placement, size, wood and string gauge.

This is a Persian santoor, obviously the names are related but there’s quite a few differences.

The hammers for all these instruments vary as well.  Persians prefer a hard surface for the hammers so that the sound is more metallic.  Greeks prefer to cover the striking end of the hammers in leather to soften the sound while eastern Europeans prefer to wrap the hammer in wire and then cover the wire with cotton.  This gives the hammer weight and a percussive bounce but a soft harp like sound. 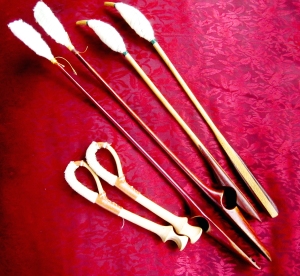 Here are some of my sticks.  The little ones are from Bellorussia, the medium are American made and the large ones are eastern European.  I prefer the large ones because of the way they sound.  The longer the stick, the more it bounces and the rounder the tone.

This is a Hungarian cymbalom.  It is much larger because it has a lot more notes making it capable of sounding like a piano.  These extra octaves require a lot more infrastructure because there’s so many strings meaning a lot more tension on the instrument.  They are very heavy and difficult to tune and move around.  On the other hand, the sound is very beautiful.

So how old are these instruments?  I’ll let Wikipedia take that one: http://en.wikipedia.org/wiki/Santur

How did you learn to play? Well, I pretty much taught myself.  It’s a difficult instrument to get your hands on, it’s difficult to tune but if you can get past those two hurdles, the rest is really fun.  Of course like anything, the more time you spend doing it, the better you get at it.  But with this particular instrument,  the joy is in the journey.

Here’s a few videos of us at the Square Roots Fest.  We had a great time playing at the Battle of the Bands on 7/13/14. It was a draw between The Renato Anesi Trio, The Fantastic Toe Trippers Orchestra and Byzantine Time Machine but we did win extra points for understanding modern technology! 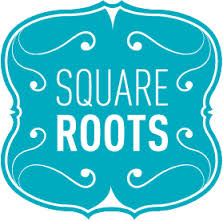